As you know, last Sunday we celebrated the great Solemnity of Pentecost. What is perhaps less well known is that Pope Francis recently inaugurated a new celebration of the Church, to take place on the day following Pentecost Sunday, namely the feast of Mary, Mother of the Church. This is such a beautiful and fitting feast, and this week I would like us to reflect on some of the homily preached by Pope Francis on this new feast day:

“The Church is feminine,” Pope Francis said in his homily on Monday, “she is a mother.”

When this trait is lacking, the Pope continued, the Church resembles merely “a charitable organization, or a football team”; when it is “a masculine Church,” it sadly becomes “a church of old bachelors,” “incapable of love, incapable of fruitfulness.”

That was the reflection offered by Pope Francis during the Mass celebrated in the chapel of the Casa Santa Marta for the Memorial of the Blessed Virgin Mary, Mother of the Church. The feast is being celebrated this year for the first time, after the publication in March of the decree Ecclesia Mater (“Mother Church”) by the Congregation for Divine Worship and the Discipline of the Sacraments. Pope Francis himself decided the feast should be celebrated on the Monday immediately following Pentecost, in order “to encourage the growth of the maternal sense of the Church in the pastors, religious and faithful, as well as a growth of genuine Marian piety.”

The “motherliness” of Mary

In his homily, Pope Francis said that in the Gospel, Mary is always described as “the Mother of Jesus,” instead of “the Lady” or “the widow of Joseph”: her motherliness is emphasized throughout the Gospels, beginning with the Annunciation. This is a quality that was noted immediately by the Fathers of the Church, a quality that applies also to the Church.

The Church is feminine, because it is “church” and “bride” [both grammatically feminine]: it is feminine. And she is mother; she gives life. Bride and Mother. And the Fathers go further and say that even your soul is the bride of Christ and mother.” And it is with this attitude that comes from Mary, who is Mother of the Church, with this attitude we can understand this feminine dimension of the Church, which, when it is not there, the Church loses its identity and becomes a charitable organization or a football team, or whatever, but not the Church.

No to a Church of old bachelors

Only a feminine Church will be able to have “fruitful attitudes,” in accordance with the intention of God, who chose “to be born of a woman in order to teach us the path of woman.”

The important thing is that the Church be a woman, that has this attitude of a bride and of a mother. When we forget this, it is a masculine Church. Without this dimension, it sadly becomes a church of old bachelors, who live in this isolation, incapable of love, incapable of fecundity. Without the woman, the Church does not advance—because she is a woman. And this attitude of woman comes from Mary, because Jesus willed it so.

The tenderness of a Mum

The virtue that primarily distinguishes a woman, Pope Francis said, is tenderness, like the tenderness of Mary, when she “gave birth to her first-born son and wrapped Him in swaddling clothes and laid Him in a manger.” She cared for Him, with meekness and humility, which are the great virtues of mothers.

A Church that is a mother goes along the path of tenderness. It knows the language of such wisdom of caresses, of silence, of the gaze that knows compassion, that knows silence. It is, too, a soul, a person who lives out this way of being a member of the Church, knowing that he or she is like a mother and must go along the same path: a person who is gentle, tender, smiling, full of love”

A WORD FROM YOUR PARISH PRIEST EASTER SUNDAY 5th April 2015 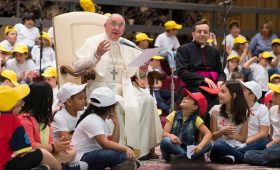 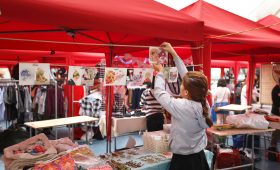 Fundraising Fun For All