In a recent pastoral letter from Archbishop Brislin has announced that this Sunday should be specifically focussed on The World Day of Prayer for the Care of Creation, a day which has been instituted by both Pope Francis, and the whole of the Orthodox Church. Well aware as we are of the huge problems facing our world through climate change, drought and floods, we are asked to reflect personally on what we are doing to take care of the earth which is God’s gift to us.  We know too that many people and businesses routinely cause great damage to our beautiful earth, and also damage the quality of life of so many people, especially the poor and the vulnerable. This is a serious moral question, because the abuse of our planet and our environment directly affects so many people in our world. And we also know that this abuse of the planet and of people is based on the sinfulness of human greed, and a complete disregard for the needs of the most vulnerable. Instead of seeing ourselves as morally responsible for the wellbeing of creation, we are living in a world which seeks to exploit the resources of our planet for material gain. This enormous moral problem is a huge focus for Pope Francis, resulting in his encyclical Laudato Si, which is a call to conversion of lifestyle, and a new respect for our planet, which is God’s gift to us.  The following text from Pope Francis might help us to reflect more deeply on our own personal need to be aware of our mother earth as a precious gift from God, and a gift for which we are all responsible:

“I wish to inform you that I have decided to set up also in the Catholic Church, the “World Day of Prayer for the Care of Creation” which, beginning this year, will be celebrated on the 1st of September, as the Orthodox Church has done for some time now.

As Christians, we wish to offer our contribution towards overcoming the ecological crisis which humanity is living through.  Therefore, first of all we must draw from our rich spiritual heritage the reasons which feed our passion for the care of creation, always remembering that for believers in Jesus Christ, the Word of God who became man for us, “the life of the spirit is not dissociated from the body or from nature or from worldly realities, but lived in and with them, in communion with all that surrounds us.”.   The ecological crisis therefore calls us to a profound spiritual conversion: Christians are called to “an ecological conversion whereby the effects of their encounter with Jesus Christ become evident in their relationship with the world around them.”.  Thus, “living our vocation to be protectors of God’s handiwork is essential to a life of virtue; it is not an optional or a secondary aspect of our Christian experience.”.

The annual World Day of prayer for the Care of Creation offers to individual believers and to the community a precious opportunity to renew our personal participation in this vocation as custodians of creation, raising to God our thanks for the marvellous works that He has entrusted to our care, invoking his help for the protection of creation and his mercy for the sins committed against the world in which we live.  The celebration of the Day on the same date as the Orthodox Church will be a valuable opportunity to bear witness to our growing communion with our orthodox brothers.   We live in a time where all Christians are faced with identical and important challenges and we must give common replies to these in order to appear more credible and effective.  Therefore, it is my hope that this Day can involve, in some way, other Churches and ecclesial Communities and be celebrated in union with the initiatives that the World Council of Churches is promoting on this issue.

Whilst I look forward to the widest possible cooperation for the best start and development of the World Day of Prayer for the Care of Creation, I invoke the intercession of Mary, the Mother of God and of St. Francis of Assisi, whose Canticle of the Creatures inspires so many men and women of goodwill to live in praise of the Creator and with respect for creation”.

A WORD FROM YOUR PARISH PRIEST EASTER SUNDAY 5th April 2015 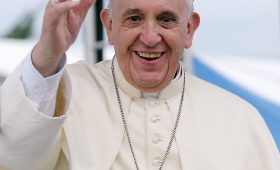 A WORD FROM YOUR PARISH PRIEST December 30th, 2018