This Sunday we are celebrating the Sacrament of Confirmation for 24 of our young parishioners.? Confirmation is the second sacrament of initiation and in the Eastern Churches it is conferred immediately after baptism.? Its name in the East is Chrismation.

In conferring the Sacrament the Bishop says to each candidate Be sealed with the Gift of the Holy Spirit.? Confirmation brings about maturity in Christian? discipleship and the outpouring of the many gifts of Spirit.? The person confirmed is now fully equipped to proclaim the Gospel by a life of integrity and to give witness to the love of God in Jesus Christ.

During the Bar/Bat Mitzvah ceremony the boy/girl is called up to publically read from the Torah (the Hebrew term for the first five books of the Bible).? This is a sacred moment because the whole life of a Jew is regulated by the Torah and it is a reminder for us (and for those being confirmed) of the significance in the life of a mature Christian of the Word of God.? We too place our lives under the Word of God and as fully committed Christians we are to become Good News for others.

Also in the Bar Mitzvah ceremony the candidate is allowed to wear TEFILLIN for the first time.?? The Tefillin are small boxes which contain four passages from the Torah ?one is placed on the forehead and another attached to the forearm of Jewish men as a reminder to pray (Tefillah is the term for all Jewish prayer and meditation) and to give witness to the holiness of God.? The Tefillin ceremony connects with the prayer and witness of those being confirmed.? Confirmed Christians enter more deeply into the life of Spirit through prayer and witness.? We are taken up into the ceaseless prayer of the Spirit and we cannot not give witness of some kind.? It is to be hoped that the witness which those being confirmed today will give will be positive and draw others to Jesus.

Bar/Bat Mitzvah ceremonies are always accompanied with parties and much enjoyment.? May all of us rejoice at this great grace for our parish.

A WORD FROM YOUR PARISH PRIEST February 26th 2017 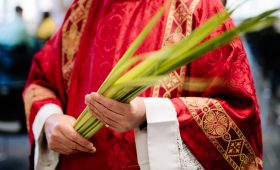