LAST Monday evening in the parish Centre there was a showing of a DVD by Rick Larson on the Star of Bethlehem.  Despite some technical difficulties, we were able to get the gist of the research into the biblical “Star of Bethlehem”.  It was a fascinating glimpse of the interface between astrology (a study of the movements of celestial bodies interpreted as an influence on human affairs) and astronomy (scientific study of celestial bodies).

As it happens I have just been reading Pope Benedict’s book on the Infancy Narratives (the third volume of his work JESUS OF NAZARETH), and the author deals with the star of Bethlehem on pages 97-102.

Both these experiences led me to review how the Church considers the stars.  In the ancient world (long before the coming of Christ and before any scientific investigation) the heavenly bodies were considered as “gods’ with direct influence on human affairs (hence “astrology”).  They were personalized and given names (and characteristics !).  But in the Bible the stars were the work of God’s hands, they gave glory to God and they received whatever function they had by God’s decree.  Of course the older pagan views slipped back into the Old Testament from time to time but the prophets insisted that the stars reveal the grandeur of their maker.

In a world redeemed by Christ, people are set free from all fear of cosmic forces, we are no longer enslaved to “the elements of the world”.  Christ has put an end to superstitions.  As Pope Benedict concludes: “It is not the star that determines the Child’s destiny; it is the Child that directs the star” (p101).

In fact Jesus is the Star, the light of the world.  And in so far as we are in him, we are Stars in the Star!

When people help us and do us a significant service we often say “You’re a star!”.  May we all be stars to one another this Christmastide and may the Star of Stars shine in our eyes. 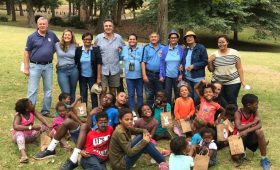