The Society of St. Vincent de Paul is an international Catholic Organisation of lay people founded in Paris in 1833 by Blessed Frederic Ozanam. He was a student who was taunted by other students at the University of Paris to do something about the poverty at that time. Together with fellow students he took up this challenge and started a the very first society of St Vincent de Paul! Placed under the patronage of St Vincent de Paul, it is inspired by his thinking and his work. It seeks, in a spirit of justice and charity, to help those who are suffering – which it does by a dedicated involvement of its members. The society is open to all who wish to live their faith by loving their neighbour in the person of the needy. No work of charity is foreign to the society, it includes (direct person to person contact) any form of help that relieves suffering and promotes human dignity and integrity. It serves persons in need regardless of creed, opinion or origin. 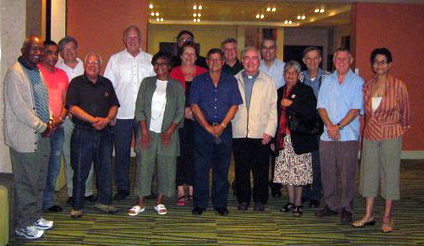 Place your offering to support the Society in their work for the poor in the box at the back of the Church. 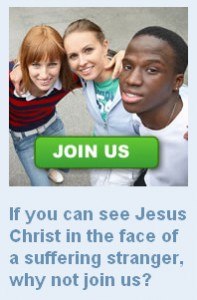 St. Vincent De Paul was born in 1581, near the village of Pouy, France some 60 miles north- east of Lourdes. He studied Theology at Toulouse and was ordained a priest in 1600. In his early days he worked on the missions in North Africa where he was captured and enslaved. After his release he was assigned to the court of King Henry of France. While in Paris St. Vincent realised that his true vocation lay in the service of the poor and not in the courts of royalty. For the rest of his life he committed himself to this task. He died in 1660.

While a Parish Priest in the little French country village of Chatillon le Dombes, he was approached by a woman who’s family lived on the outskirts of the village and desperately in need of assistance. Not only did St. Vincent speak about this family to the congregation; he enlarged on the duty of every Christian to help his neighbour, particularly the poor and especially the sick. His words reached the hearts of his congregation and for the rest of the day there was a regular procession from the village carrying food to the family. Though the people were very generous, their charity was badly organised. A large quantity of food had been brought, some of which would have gone bad before the family were able to use it. And when their provisions had been exhausted they would once again find themselves on the verge of starvation.

It was because of this that St. Vincent De Paul thought of the idea to organising the regular distribution of relief to the poor, and of having special visits beforehand to their homes to find out their circumstances. With several ladies in his parish he discussed his project. From this group of women he was able to found the Sisters of Charity of St. Vincent De Paul (The ‘Daughters of Charity’). Later on he also founded a congregation of Priests – the ‘Vincentians’, and a lay society of women – The Ladies of Charity.

When Frederic Ozanam founded the Society he was a mere 20 years of age and a law student at the Sorbonne University in Paris. He went on to not only gain his Batchelor of Law but his Doctorate. Having completed his legal studies he returned to his home city of Lyons where he commenced practice in the legal profession. Ozanam died at the young age of 40 leaving a widow, Amelie and a daughter Marie. He was anxious to do so much more with his life especially the completion of a series of books on the history of Christianity from the 5th to the 15th century, having written only two of the planned seven books. Ozanam gave his life totally to God. Therefore it is not surprising that when encouraged by his confessor on his death bed not to fear but to trust in God, Ozanam replied, Why should I fear Him when I love Him so?