As long ago as 1974, the Pope, Blessed Paul V1, published an Apostolic Exhortation  (Marialis Cultus/ Marian Devotion) in which he outlined  the place of ‘Devotion to the Blessed Virgin Mary in the Liturgy’ (Part One),  ‘The Renewal of Devotion to Mary’ (Part Two) and ‘Observations on two exercises of Piety: The Angelus and the Rosary’ (Part Three).

BIBLICAL: All forms of Christian piety should have a strong biblical imprint.  By this the Pope is expressing the view that true devotion to Mary should be rooted in the Holy Scriptures. What this means in practice is that “the texts of prayers and chants should draw their inspiration and their wording from the Bible and above all that devotion to the Virgin should be imbued with the great themes of the Christian message”.

The Rosary certainly meets this criterion as all but two of the 20 mysteries in our rosary are taken directly from the text of the New Testament;  the other two (The Assumption and the Coronation of Mary) can only be understood in the context of the Scriptural revelation.

LITURGICAL: Marian devotions can be very varied in expression. The Pope is careful to maintain the primacy of the Sacred Liturgy: “It sometimes happens that novenas or similar practices of piety are inserted into the very celebration of the Eucharistic Sacrifice. This creates the danger that the Lord’s Memorial, instead of being the culmination of the meeting of the Christian community,  becomes the occasion, as it were, for devotional practices”.  It used to be the practice in some places that the rosary was publically recited during Mass while the priest said the prayers of the Mass silently.  Harmony is the key here, not merger or suppression.

ECUMENICAL:  We have learned to be sensitive to the rich Christian heritage shared with  other Christian communities of faith.  The Pope says that a sign of true devotion to Mary is making sure that we do not so exaggerate the role of Mary as to  “mislead other Christian brethren about the true doctrine of the Catholic Church”.  One goal of our relationship with Mary is that our devotion to her should not be an obstacle but a path to closer union in the Body of Christ. Pope Paul’s conclusion is that “her intercession can help to bring to realization the time when the disciples of Christ will again find full communion in faith”.

ANTHROPOLOGICAL:  True devotion to Mary will be sensitive to the insights of modern thinking on the role of woman in society.  It has to be admitted that in the past the picture of the Blessed Virgin presented in some devotions tended to assume that women were inferior to men, that they had little if any role in public society.  True devotion to Mary will therefore take careful note of the real role of Mary in the work of our redemption, her experiences as a single mother, as a refugee, as a liberated woman, as “truly our sister”.  What we find so helpful and attractive in the example of Mary is not the social role of woman in her age but her full and responsible acceptance of the will of God. We also see her as the first and most perfect of Christ’s disciples.

Our devotion to the rosary and to Mary as our Perpetual Help draws us closer to Jesus her Son and does so in a way which harmonizes with other aspects of our faith.  We can rejoice at inheriting a sound and Christian devotion to her whom we call our Blessed Virgin. 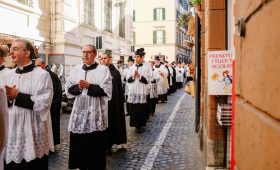 A WORD FROM YOUR PARISH PRIEST 31st January 2016