Skip to content (Press Enter)
Home>News>Parish Priest>Just A Thought>A WORD FROM YOUR PARISH PRIEST May 14th, 2017

Two of the visionaries of the Marian apparitions of Fatima – young shepherds Jacinta and Francisco Marto – will be canonized by Pope Francis when he visits the Portuguese shrine in May. The Vatican announced the pontiff approved the miracle attributed to their intercession on Thursday, the final step necessary before they could be made saints. Pope Francis had already been scheduled to be in Fatima for a two-day trip from May 12-13.

Italian media reports say he will canonize them at the Mass already scheduled for May 13, the Feast of Our Lady of Fatima and the 100th anniversary of the date when the two children – along with their cousin Lúcia Santos – said the Virgin Mary first appeared to them. Francis will be the fourth pope to visit the shrine, following Blessed Paul VI, Saint John Paul II and Benedict XVI.

The children, poor and illiterate like most peasants at the time, said an angel appeared to them three times during 1916. The first apparition of Mary was said to have happened on May 17, 1917, when Lúcia was ten, Francisco nine, and Jacinta seven.

She is said to have appeared for the next six months, always on the 13th. On October 13, 1917, tens of thousands of people came to the spot, and the “Miracle of the Sun” – where the sun seemed to dance and spin in the sky – was reported by several witnesses.

Sadly, less than two years later, Francisco was dead at ten years of age, with his sister Jacinta dying the next year at the age of nine, both victims of the influenza pandemic which spread across the world after World War I. According to tradition, both spent their final months in intense prayer, prostrating themselves with their head touching the floor as they said the angel taught them, and dedicating their suffering for the conversion of sinners.

Their cousin Lúcia joined a convent as soon as she was of age, and later transferred to a Discalced Carmelite convent in Coimbra, Portugal. In 1941, she said she and her two cousins had been given three secrets by Mary: The first was a vision of Hell; the second concerned the end of the First World War, with a warning about a second, larger war; and the third was an apocalyptic secret which she did not reveal, although it was written down and delivered to Rome in 1957, although it was later published by the Vatican on June 26, 2000.

Every pope since Pius XII has expressed their belief that the events at Fatima were supernatural, and John Paul II attributed his survival of an assassination attempt on May 13, 1981, to the intercession of Our Lady of Fatima.

Pope Francis said last October he wanted to visit the Portuguese shrine, and the trip was confirmed in December. He spoke about Fatima during his general audience on May 11, 2016.

“She asks us to never offend God again. She forewarns all humanity about the necessity of abandoning oneself to God, the source of love and mercy,” the pontiff said, “Following the example of St. John Paul II, a great devotee of Our Lady of Fatima, let us listen attentively to the Mother of God and ask for peace for the world.”

John Paul II was the pope who beatified  Francisco and Jacinta in 2000, also at Fatima.  Their cousin Lúcia, 93 at the time, attended the ceremony. She died in 2005.

Three years later, Benedict XVI waived the usual 5-year waiting period to begin the process of her beatification, and the diocesan phase of the process concluded on February 13 of this year.

A WORD FROM YOUR PARISH PRIEST November 27th 2016 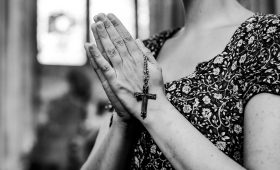